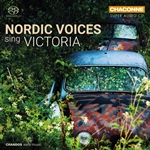 This surround-sound recording comes ten years after a ‘warm, consistent and moving’ (BBC Music) album of Lamentations, which featured pieces by sixteenth-century composers, including Four Lessons by Victoria. Examples of the composer’s exceptional output, characterised by a careful setting of the text and an ability to control texture by a constant grouping and regrouping of different voices, here meet the artistic resourcefulness, versatility, technical precision, and freshness of the young ensemble.